Places to visit in Chortkiv 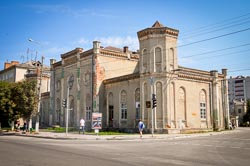 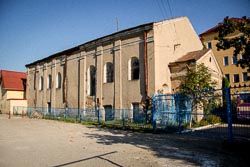 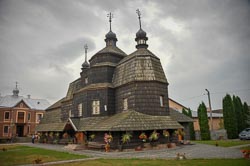 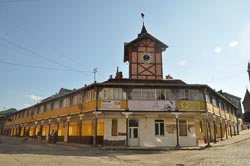 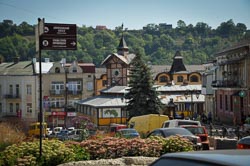 My custom tours are minimum one day long and will be customized exclusively for you. You will visit only the places you want to see and do only the things you want to do, always at your own pace. You can combine the places, finish and start your tour wherever you want.
A few places even in differnt towns can be included in one day program. One day tour can last up to 12 hours.
You can send me a custom tour enquiry to tell me your travel plans so that I can assist you. 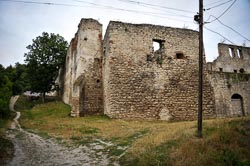 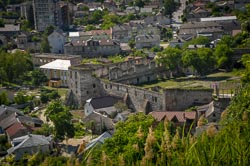 Chortkiv castle dates from 1610. It is a stone building and was built as a private possession on the place of an earlier wooden castle (most of the medieval castles in the area were wooden ones). It was erected of local sandstone and is regular in the plan of five corners. At each corner, it was fortified with towers. Nowadays, we have only defensive walls (which surround the yard), two towers and palace ruins preserved. Earlier the interior consisted of stone houses located parenterally. At the same time, the external walls of these houses served as defensives ones. Out of these houses, we have only numerous cellars left.
The main entrance to the castle was in the northern wall. Palace occupies western side of the interior yard and is rectangular in plan joined with two towers at the corners of the castle.
Chortkiv castle is built in Renaissance style and at the yard facade it had the arch galleries of two floors. The premises of the lower floor were intended for economic purposes and were covered with a cross-like and semi-compass arch. The entrance to the living premises of upper floor was through the open staircase, which led onto the gallery. The halls of the palace were painted with frescos on secular themes.

Two preserved towers with their structure come out of the walls line. Southwestern tower is of five facets and has two circles with a cellar. The north-western tower is of four facets and has one circle with a cellar also. Their floorings had been preserved.
At the time of reconstruction of the castle, after it lost its defensive meaning (in the first half of 18th century) towers were turned into the risalithes of the palace and at the external facade, a terrace was arranged between the towers. Also cellar premises (coming out as arch from the outside) were built under this terrace. The preservation of castle ruins was made at the beginning of 20 th century (during Austrian rule) by Podolian Tourist and History Society.
Chortkiv was on the main road junction, open to Tatar and Turkish invasions from the southeast. Thus the castle played an important defensive role before the 18th century (when it lost its defensive purpose and was reconstructed after the invasions ceased).

Places to visit in Ternopil Region 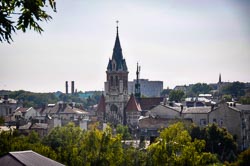 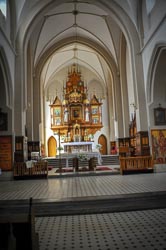 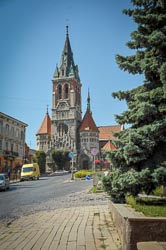 In about 1600, monks of the Dominican Order arrived in Chortkiv, who came here from a town that once existed on the site of the present-day village of Shmankivtsi (10 km south-east of Chortkiv).

Stanislav Golsky, who invited Dominicans to Chortkiv, provided funds for the construction of the church, which would later become the nucleus of the monastery. The place for its construction was chosen on the right bank of the River Seret. Probably, by 1610 the church was built. Its main facade was on the old market square. In 1612, Stanislav Golsky died, and he was buried in the temple's dungeon.

How church looks in the initial period of its history, there is no information. It is unknown whether the church itself was adapted for defense, but around the perimeter it was surrounded by an outer defensive wall that protected the temple and other monastic buildings.

In 1663, during a campaign to Smolensk, moving through Chortkiv, King of the Polish- Lithuanian Commonwealth Jan II Casimir (1609-1672) visited the Holy Liturgy in the temple. And in 1683 the next Polish king, Jan III Sobieski, visited the monastery church.

It is known that in 1731 the church was rebuilt and renamed in honor of Stanislav, a bishop and martyr.The church is reconstructed again in 1780.

At the beginning of the 20th century, on the initiative of Chortkiv burgomaster Ludwig Noss, a large-scale reconstruction of the Dominican temple was launched. Such responsible work was given to Jan Sasu Zubritsky (1860 - 1935).
The works were begun in 1903 and lasted for nine long years and was almost completely completed before the start of the First World War. As a building material, stone and brick were used. It is known that during this period the premises of the old monastery (sacristy, monastic chancellery, cells) were adjacent to the temple.

It is also necessary to mention the two-story building of the so-called New Monastery, where the monks and the library, as well as reception, were arranged. In the process of rebuilding, the church and monastic complex lost all defensive features.

After Soviet Power established its rule over the territory, the divine service in the church stopped. Since 1959 its premises was converted into a city’s warehouse. In 1989 the church was returned to the Dominican Fathers. In 2014, a stone cross symbolizing Holy Mission was installed in the church yard. In the main altar there is the copy of the image of the Holy Mother of St. Rosary .

According to legends, the icon of the Holy Mother of St. Rosary was painted in the 15th century. The image was brought to Ukraine from Belorussia. The image for Chortkov was presented by the Polish king Jan Kazymyr. Before that it was in Lviv in the temple of St. Mary Magdalene During the Second World War, the icon was taken to Krakow. Today the original is located in the Warsaw Temple of St. Jacek, and the icon that is in Chortkiv is an exact copy of the original. 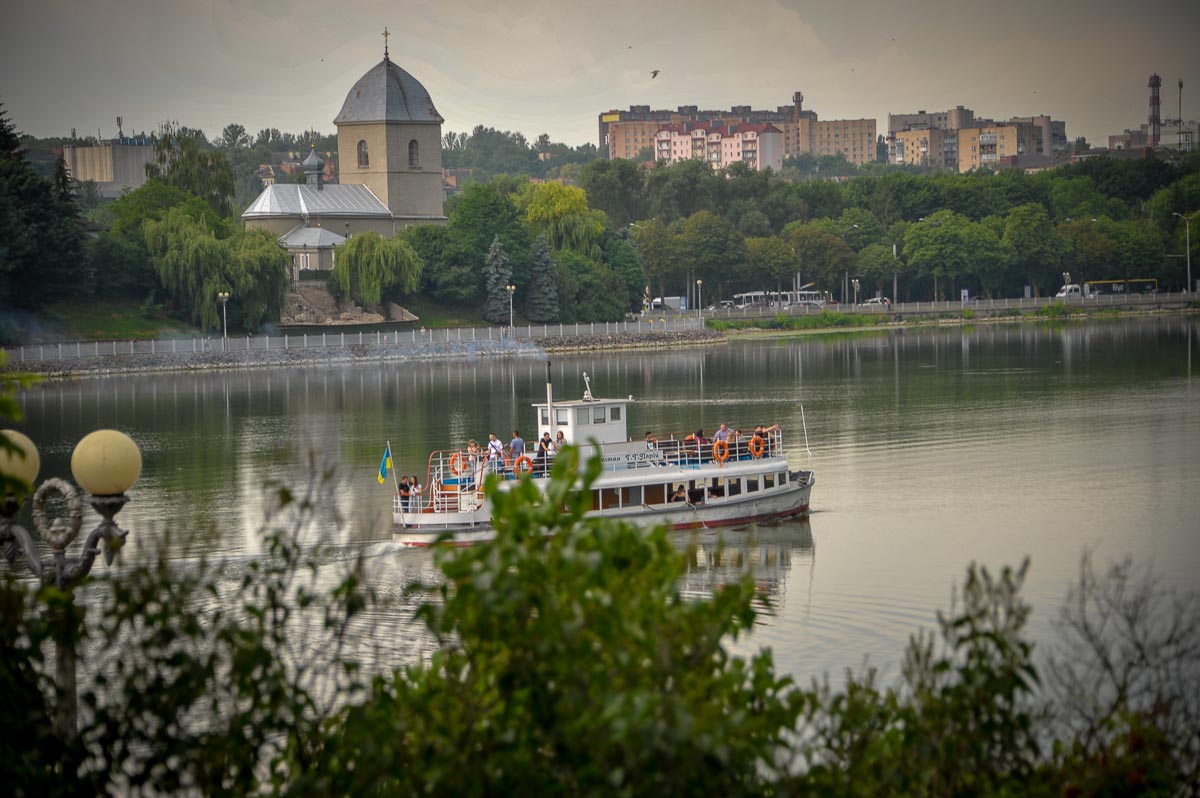 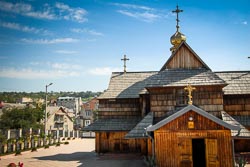 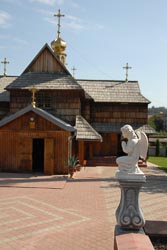 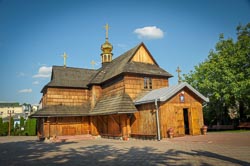 Church of the Assumption of the Blessed Virgin

The Assumption Church is the oldest in Podillya, a model of the Podolsk School of Folk Wood Architecture. The church, like the bell tower, is an architectural monument of national significance. Its construction began in 1581 on the initiative of the artisans Chortkov furrier Mykola Drachuk and tailor Gavril Zhuravlya, completed in 1584.

Was destroyed during the Turkish-Tatar incursions, and subsequently was rebuilt in 1635 from oak beams, which were fastened with wooden chops, without nails.

In the years of the Soviet era, the temple, the bell tower fell into decay. In the late 80's of the twentieth century the church and the bell tower were disassembled and "skillfully restored" from practically zero, almost from the level of the earth. On the perimeter of the church from under the wooden lining, which the church was covered during restoration, you can still see the "native" wooden logs which were covered during restoration.

At present, the temple is of triple-stage cross type. The lower part of the authentic iconostasis was fully restored. The original ancient wall paintings were preserved: Baptism of Rus-Ukraine on the left side of the temple and the Last Judgment on the right sight of it. The side altars of the Saviour and the Blessed Virgin Mary were also restored and recently covered with a gold coating. There are also three ancient burial places of the priests who served in this temple. 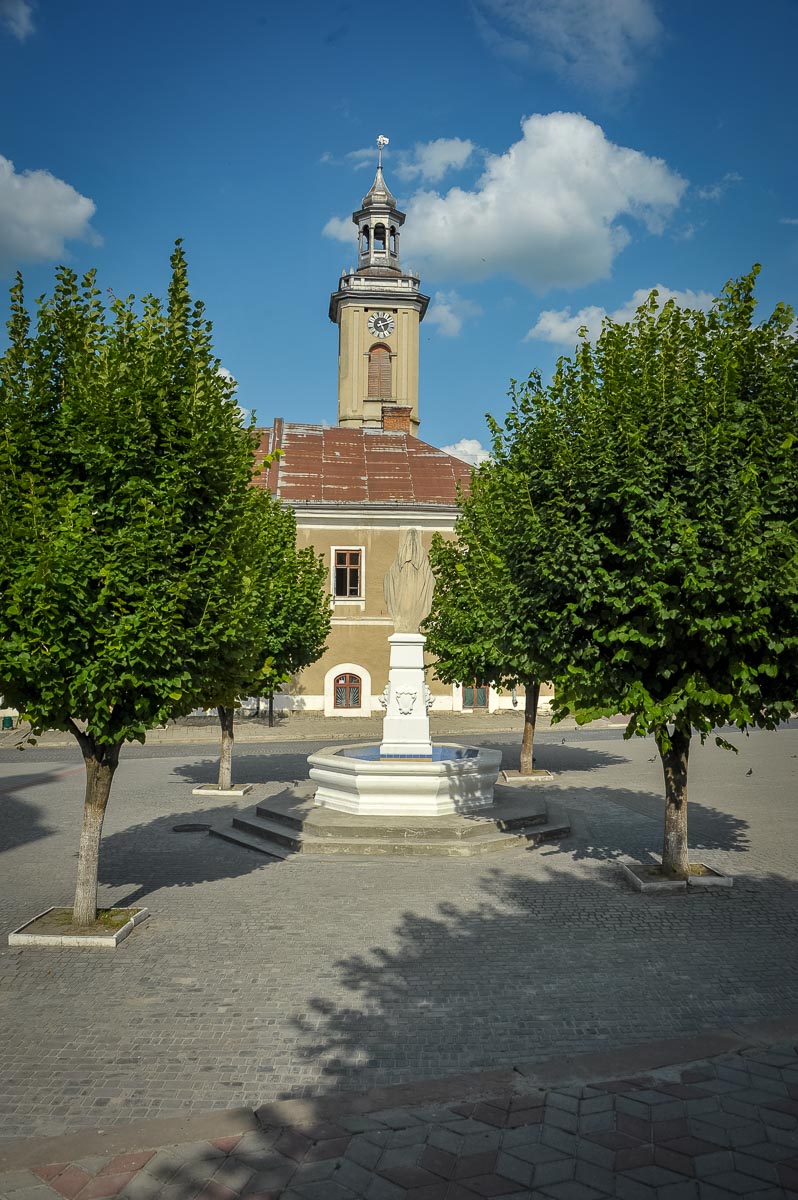 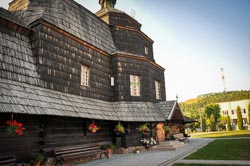 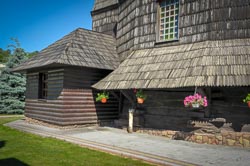 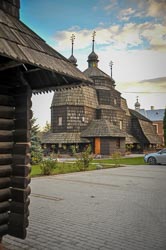 Church of the Ascension

The Ascension Church is a work of folk architecture, a unique example of Ukrainian wooden construction. The masters built this temple in 1630 without a single nail.

Together with the city, the church suffered terrible destruction during the attack on the Chortkiv Tatars in 1640 and the Turks in 1672. The church was completely rebuilt in 1717. In the same year during the Feast of the Ascension of the Lord, consecrated as Ascension, until this time, the church was the church of St. Nicholas 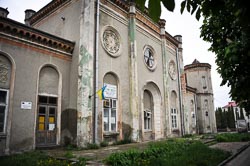 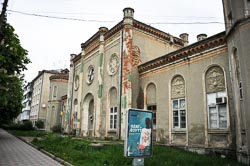 "New Synagogue" in Chortkiv was built in 1905 - 1909. The architect was the Viennese architect G.Geldcremer. The building quadrangular with two beautiful towers ending graceful towers. Walls and synagogue roof covered stone carving rich ornamentation and paintings made by Italian masters. Inside was carved altar.

In 1765 the Jewish community of Chortkiv numbered 812 Hebrews and 56 Karaites. in 1797 in Chortkiv has 121 house belonged to Jews, and 232 - Christians. in 1848 in Chortkiv was born one of the most famous Galician writers Karl Emil Frantsoz, (1848-1904). Grand Rabbi David Moshe Fridman, (1827-1904), founder of the Hasidic dynasty of rabbis that came from Chortkiv. In 1888 he opened in Chortkiv Society for the Study of the Torah, which gave the world not a connoisseur of the Torah. Next Chortkiv Hasidic zaddik becomes his son Rabbi Israel (1854-1934). During World War II Rabbi Izrael went to Marienbad, and then to Vienna. Third Chortkiv zaddik became Rabbi Nachum Mordecai, (1875-1946). He died in Tel Aviv. This Hasidic dynasty exists today. 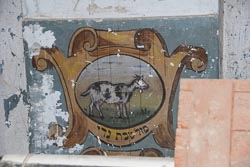 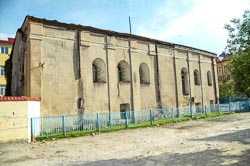 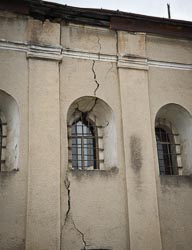 The construction of the Chortkiv Synagogue began in 1754 and was finished in 1771. In 1765 the Jewish population numbered 764 people.

The Chortkiv Synagogue has historic Hebrew inscriptions, fragments of paintings, stone carvings, and a unique system of space management of the interior. This is a rare example of a defensive type of synagogue with preserved elements of the paintings and inscriptions dating back to the XIX century. The old synagogue, almost the only building that survived in the Jewish quarter after the war. 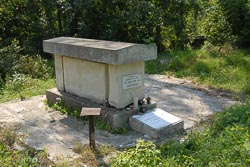 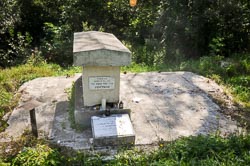 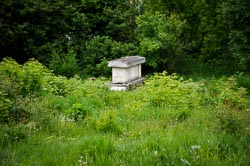 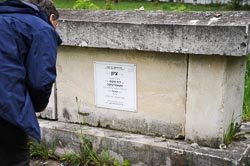 In 1870, Rabbi David Moshe Friedman (1827–1904), son of Israel Friedman Ruzhiner, came to Chortkiv, and is best remembered as the Tzadik of Sadohora (currently on the outskirts of Chernivtsi). Eventually, the town became the residence of the Chortkiv branch of the Ruzhin-Sadigora Hasidic dynasty.

In the Hasidic tradition, David Moshe Friedman is remembered as a humble and good-natured man. Although he might have lacked his father's organizational talent, he soon gathered one of the largest Hasidic groups in Galicia. The Chortkover Rabbi led an ascetic life completely devoted to prayer. He could spend days without sleep, food or drink, not showing any signs of weakness. He shunned form worldly affairs and distanced himself from problems of the community but still enjoyed the authority among its members.
His older brother, Avraam Yaakov (1820–1883) said about him: "I have never seen such a saintly Jew". During his prayers, Rabbi David Moshe experienced ecstatic states; he used to say: "...a fire burns within a tzadik's body, which sometimes escapes without. Like water escapes an overfilled vessel, the just one expresses himself by the excess of holiness so that people see this holiness and believe in him." His son Israel (1854–1934) continued the tradition.
The third Tzadik of Chortkiv, Nachum Mordechai, died in Israel in 1946, leaving behind many students